Showing posts from January, 2021
Show all

Finding Joy in Your Marriage  (Week 2: Nurture Your Fondness and Admiration) I can recall some of the first memories I have of meeting my wife more than 35 years ago. We met at a Baptist church, and were introduced by the young adult pastor. We had both just completed our first university degrees, and I had moved to Vancouver and was now attending a local interdenominational Protestant seminary, and Wendy was training to be a teacher. Although we had previously attended universities in different cities, we were both deeply involved in the same campus ministry, so we shared an immediate spiritual connection. After a brief introduction, I tried to sit by her in church, but she grabbed some other girl and made her sit between us! I didn’t take this as rejection, and continued my pursuit. Soon after this we both ended up going out for coffee with a large group of young adults from church. I made sure to sit across from her. We immediately fell into a deep conversation, so deep in fact, tha
Post a Comment
Read more

I wanted to take a minute to reflect on our faith in relation to the book we are reading. Dr. Gottman’s book, The Seven Principles for Making Marriage Work is not about our faith, but the psychology of good relationships.While not directly about the faith, there is nothing in the book which I believe conflicts with our faith, and the author John Gottman is a practicing Jew from an Orthodox Jewish background. Since Gottman’s book is a work of psychology, someone might wonder how psychology in general relates to our faith. In fact there are two ways of knowing things, faith and reason. Catholic tradition has always seen these as complementary ways of knowing truth.  In the Old Testament, the main Hebrew word for ‘truth’ is emeth . This word has the basic meaning of fitness, and trustworthiness. From this emeth takes on the meaning of “that which is opposed to falsity and falsehood.” (Ramsdell, 264) In a similar manner the Greek word for truth found in the New Testament, alētheia mean
Post a Comment
Read more

Finding Joy in Your Marriage (Week 1: Enhance Your Love Maps) 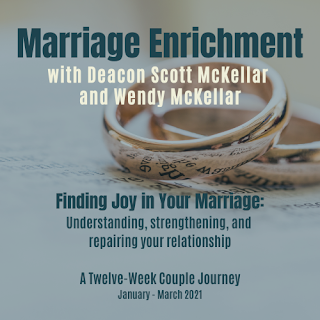 Finding Joy in Your Marriage  (Couple’s book study) Week 1: Enhancing Your Love Maps Dr. Gottman’s book, The Seven Principles for Making Marriage Work begins with a review of his research (p. 1-52). Previously a great deal of advice for married couples was based on what many people thought intuitively must be good advice. The problem is that very little actual research had been conducted to prove that this typical advice for married couples was effective. Some popular ideas in the 1980’s for improving marriages included improved communication skills, and active listening. Therapies focused on conflict resolutions skills, and dealing with personality problems. These are obviously excellent relationship goals! The problem is, researchers discovered that the typical strategies for improving these areas were completely ineffective.They also discovered some simple actionable behaviors which instead made a big difference! Gottman and his colleagues set out to study couples in a more scienti
Post a Comment
Read more
More posts