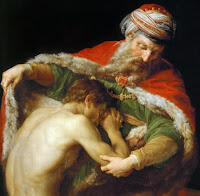 Jesus has a great deal to say about forgiveness.

Forgiveness is important enough to be one of the seven petitions of the Our Father, “Forgive us our debts, as we forgive our debtors.” (Matthew 6:12). In fact This teaching comes with a sober warning in Matthew 6:14-15 (CCC 2838).

This petition is astonishing. If it consisted only of the first phrase, “And forgive us our trespasses,” it might have been included, implicitly, in the first three petitions of the Lord’s Prayer, since Christ’s sacrifice is “that sins may be forgiven.” But, according to the second phrase, our petition will not be heard unless we have first met a strict requirement. Our petition looks to the future, but our response must come first, for the two parts are joined by the single word “as.” (CCC 2838).


Jesus modeled forgiveness without limits in his own personal example, even in the face of unspeakable injustice. At his crucifixion Jesus cried out, “Father, forgive them, they know not what they do” (Luke 23:34).


“Forgiveness is above all a personal choice, a decision of the heart to go against the natural instinct to pay back evil with evil. The measure of such a decision is the love of God who draws us to himself in spite of our sin. It has its perfect exemplar in the forgiveness of Christ, who on the Cross prayed: “Father, forgive them; for they know not what they do” (Lk 23:34).”[Message of World Day of Peace, 2002].

In other words, we are asking God to forgive us in the same manner that we forgive others. Yet since forgiveness is sometimes a very difficult thing to do, we might be tempted to set it aside and focus on other aspects of our faith. Someone might ask, ‘How important is forgiveness to Jesus?’ Is it a hard teaching or difficult side issue that we could safely ignore? Does forgiveness have limits?

Forgiveness is sometimes difficult enough for us to want to make excuses. Referencing a common excuse from Jewish tradition, Peter asks if we must forgive our offender to the limit of seven times. To his amazement Jesus replies, “Not seven times but seventy-seven times” (Matthew 18:22). This expression is not an exact number but a call to forgive without limit.

Do we still have to forgive if the other person is not sorry or hasn’t admitted their fault? While we can certainly protect ourselves from further harm, we are called to always offer forgiveness.

Jesus’ point is that, as Christians, we are called to forgive without count or limit. In effect he is reversing the former teaching that there was no limit to hatred and vengeance by teaching that now there is no limit to mercy and forgiveness.

Finally, Jesus modeled forgiveness personally as a rabbi or teacher. Even in the face of unspeakable injustice during his passion and death, Jesus chose to act with mercy and forgiveness. At his crucifixion Jesus cried out, “Father, forgive them, they know not what they do” (Luke 23:34).

While forgiveness is always remains a personal choice, for Christians the only morally acceptable choice is to forgive.

This process is complicated by our feelings of injustice, and at times guilt and shame. We may also need to work through feelings of anger and resentment. At times we may also need to let go of the desire to take revenge. this includes even subtle forms of revenge such as talking negatively about the offender to others who don’t need to know about them, or engaging in passive anger, ridicule or treating someone with contempt.

Once again this doesn’t mean we allow ourselves to be a victim. Jesus reminds his disciples, “Be on your guard! If your brother sins, rebuke him; and if he repents, forgive him. And if he wrongs you seven times in one day and returns to you seven times saying, ‘I am sorry,’ you should forgive him.” (Lk 17:3–4).

Jesus highlights two points in this passage. The first is the clear shared responsibility to pursue righteousness. The call to rebuke the other person is about accountability to the Christian community. We are not called to passively allow ourselves to be victimized. We can hold others responsible for the pursuit of justice. Having said this, we also need to be willing to forgive and even to forgive repeatedly.

Why would we be asked to act this way? I think it is because we are imitating the generosity and mercy of God. As the Apostle Paul puts it, “But God proves his love for us in that while we were still sinners Christ died for us” (Romans 5:8).

God’s own extravagant love and mercy calls us to treat others in the same manner. While all of this is true from a religious point of view, surprisingly it is also good psychology. I will take up this topic in the next post.

I wanted to take a minute to reflect on our faith in relation to the book we are reading. Dr. Gottman’s book, The Seven Principles for Making Marriage Work is not about our faith, but the psychology of good relationships.While not directly about the faith, there is nothing in the book which I believe conflicts with our faith, and the author John Gottman is a practicing Jew from an Orthodox Jewish background. Since Gottman’s book is a work of psychology, someone might wonder how psychology in general relates to our faith. In fact there are two ways of knowing things, faith and reason. Catholic tradition has always seen these as complementary ways of knowing truth.  In the Old Testament, the main Hebrew word for ‘truth’ is emeth . This word has the basic meaning of fitness, and trustworthiness. From this emeth takes on the meaning of “that which is opposed to falsity and falsehood.” (Ramsdell, 264) In a similar manner the Greek word for truth found in the New Testament, alētheia mean
Read more